Vancouver Waterfront Gets a Grand Opening

With great fanfare and celebration, the long-awaited Vancouver Waterfront is officially open! About 15,000 eager people turned out for the grand opening event on September 29 to see for themselves what all the hype has been about. Local government and business leaders grandly cut the ceremonial ribbon and took turns making speeches to herald the occasion. With food and drinks from local vendors, entertainment by street performers and live music, and thousands of sand buckets and shovels provided to kids by iQ Credit Union for digging in the sandy areas, the grand opening celebration was a well-attended, roaring success. Local excitement and energy for the project should give The Waterfront plenty of momentum to ride through all phases of the development.

Currently the most striking feature at The Waterfront is the suspended cable-stayed Grant Street Pier which floats suspended in the air, extending 90 feet out over the river. It’s a great spot for photo opps and watching boats. Kids can play and dig in the sand at the accessible beach areas made just for them. When you get hungry, there are two eateries now open for business—Twigs Bistro & Martini Bar and Wildfin American Grill. Also near completion is an office building and a luxury apartment high rise. 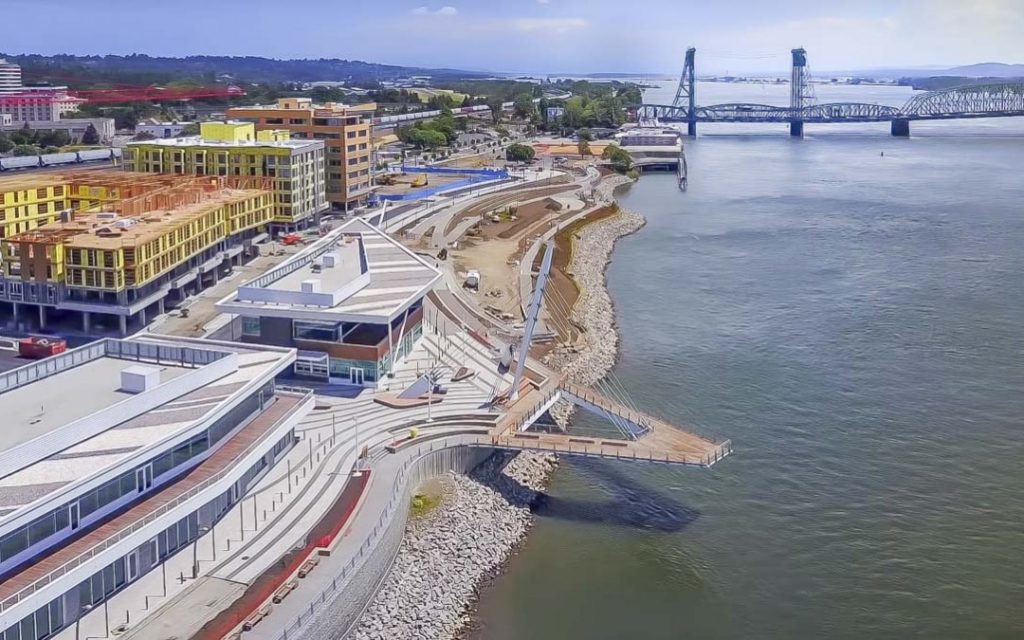 The Waterfront is expected to gain more eateries in the very near future. Maryhill Winery Tasting Room, Barlow’s Public House, and MidiCi The Neapolitan Pizza Company are scheduled to open in 2019. Also in 2019 more housing will be added with RiverWest apartment homes, and Kirkland Tower luxury condos adjacent to the five-star Hotel Indigo. Soon to follow, expected in 2020, will be an AC Marriott. The longer term phases of development over the next decade or so will include the revitalization of Port of Vancouver’s Terminal 1 which could host such amenities as a public market, hotel, retail, commercial and community space.

The Waterfront will go through several phases of development in the coming years and is expected to transform Vancouver from a bedroom community to a destination, as well as a place for locals to live, work, and play. We highly recommend that you explore this new area!

I wish to express my sincere appreciation to you all. EVERYONE is impressive ! Dave was amazing and involved me with decisions during building... and Chris... I haven't enough words to express my thanks to you...you're an amazing person in every way...always professional, prompt, and willing to find solutions to problems. Your integrity stands out among others. What a find when I discovered Evergreen Homes!