Quaffers can do their thing in Vancouver, where brewpubs include more than 20 locations all over Clark County.

“The boom is simple,” said Sunny Parsons, co-owner of Cascade Flooring America and founder of Heathen Brewing. “Craft beer is much like food and being a restaurant owner. Only cooler.”

“The industry is amazing,” Parsons continued. “A brotherhood where your competitor is your brother. As in we all help each other out knowing the struggle to be independent, small craft breweries isn’t easy. Communities embrace the effort and make us all feel like we make our home a better place to live.” 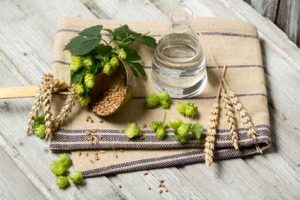 Almost all of our ingredients are from Oregon and Washington. We are spoiled in the sense that it comes from right here.

The number of brewers isn’t likely to go down anytime soon. In addition to all four seasons, affordable housing, both city and country living, and oceans and mountains all within an easy day trip, Clark County is becoming attractive to those looking for a cool, creative, and hip place to be.

“I think we will continue to see new breweries and become even more regionalized by neighborhoods,” Parsons said. “Clark County is a young Portland. Amazing culture just now budding into what makes Portland great.”

Clark County is also situated perfectly for locally-sourced materials to make award-winning beer. The best grains, hops, and whatever else Clark County brewers can think of to put in their beer can all be found in the Pacific Northwest.

“Almost all of our ingredients are from Oregon and Washington,” Parsons said. “We are spoiled in the sense that it comes from right here.  We travel once a year to meet with the hop farmers and select that year’s crop.”

With so many breweries, it may be difficult to try all that Clark County brewers have to offer. To make it easier, though, there are several beer festivals throughout the year, letting the thirsty people of Clark County sample wares from several breweries all in one place.

Here is a list of a Clark County breweries: